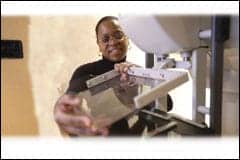 Mammography technicians on the front lines of breast cancer screenings deal with many daily challenges, but aside from having the latest and greatest equipment, little things mean a lot to them—and their patients.

Walk into a woman’s imaging clinic these days, and you may find a busy hive of mammography technologists guiding patients into a screening exam every 15 minutes, 5 days per week, from early in the morning to sometimes late at night. Some technologists work with foul-smelling x-ray processing chemicals, while others work with the latest and greatest full field digital mammography (FFDM) machines. All work with paperwork and nervous patients who want an accurate and clear diagnosis with minimal pain from the exam.

But while new technology and adequate staffing can certainly make a mammography technologist’s job easier, technologists say that little things like a shorter walk to the dark-room or a even a comfortable pad on the mammographic plate can make a positive difference for them—and their patients.

As yearly mammogram screenings become more routine for women over 40, it will be the registered mammography technologists who are occupying the front lines of breast cancer screening and diagnosis.

With the industry and government requiring more quality control and accreditations, registered technologists are challenged with keeping up with new technology, continuing education, new protocols, and, of course, paperwork—lots of it.

Susan Vennett, RTRM, AART, mammography supervisor at Colquitt Regional Medical Center, Moultrie, Ga, said that between interviewing patients, the quality control for the x-ray processor and machines, plus keeping up with pathology results and sending letters to patients, the daily paperwork can chip away a large chunk of the day. At the same time, she and her fellow technologists realize that it is all necessary for keeping up with accreditation and federal regulations.

“I’d love not to have to do paperwork, period,” said Cissie Rowell, RTRM, AART, one of the staff mammographers at Colquitt Regional. “I’d love just to go in and work with the patients. But that’s not possible, because some way, shape, or form, you’ve got to do paperwork and record what you see and what you’ve found.”

Anita Blalack, RTRM, mammography technologists at Marble Falls Imaging, Marble Falls, Tex, adds, “Generally, [the quality control paperwork] takes me no more than 30 minutes a day, but when you have to do your quarterly, your semiannual, and your annual, that can take a good half-day or longer to get that done.”

PACS and electronic medical record software may help some technologists decrease their load. However, PACS systems that incorporate digital mammography are relatively new—and expensive. Given the decreasing reimbursements and the cost of FFDM, technologists are resigned to printing films, filing, and their current reporting systems, some of which are still backed up by pen and paper.

Paperwork aside, it is of course the exams that make up the most significant portion of their day.

Film-based mammography systems still dominate the mammography world. While many hospitals and imaging centers are budgeting for FFDM systems in the near future, the majority of technologists and their facilities are still handling film—and all that goes with it.

ASRT’s director of research, John Culbertson, said that there are 48,732 registered technologists in mammography as of July 2008.

Staffing shortages also appeared to be under control. “From the 2008 ASRT Staffing Survey, the estimated percent of unfilled positions in mammography is 4.2%, compared to 5.5% in 2006. With the number of new students entering the field and turnover rate in relation to this growth, there is currently a relative balance in the supply and demand of techs and jobs,” Culbertson said.

The trend in facilities installing FFDM systems is also growing, but the majority of facilities are still utilizing film. The FDA’s Center for Devices and Radiological Health and the Mammography Quality Standards Act (MQSA) report that as of October 2008, there are 8,814 certified facilities with a total of 13,404 accredited mammography units. Of these facilities, 3,774 are certified with FFDM units, and there are a total of 5,729 accredited FFDM units in those facilities.

Consequently, about 42% of mammography systems in the United States are now FFDM units.

Vickie Tucker, RTRM, AART, another staff mammographer at Colquitt Regional, arrives 30 minutes before the first patient to perform the required quality control checks on the center’s equipment. Those checks include performing a phantom breast image exam, running quality control film strips through the processor, then making sure the processor’s chemicals are at the correct levels and temperature and that the resulting images are within the manufacturer’s parameters. If for some reason the numbers are off that morning, then another phantom test must be performed. And if the numbers are still off, everything stops.

“It doesn’t happen often, but if we run another QC strip and the numbers are still off, then we have to cancel our patients until the repair person comes in to check out the processor,” she said. “Usually, it’s small. A part can go wrong, or the chemical mix can be off. It’s rare, but that’s why we have to do a QC every day.”

One of the little things that make a difference in the morning tests as well as the regular workload is the film processing room’s proximity to the exam room. While some centers have their processors in an adjacent area, others have them farther away, and technologists have to travel around the corner or down a long hallway, carrying cassettes to the processor.

“It’s a long walk to the darkroom, but that’s good exercise,” Blalack joked.

Exercise notwithstanding, a film processor that is located 100 feet down the hall may not seem significant to the technologist or to the imaging center. However, when one multiplies those trips by 10 patients per day, per technologist, the staff may have stronger calf muscles, but clinics may also be increasing exam time and decreasing daily volume by perhaps several patients.

Added to that load is the repetitive motion of loading and unloading of x-ray cassettes, plus lifting jugs of chemicals for the older-model processors that do not have automatic chemical-replenishing systems.

Bottlenecks outside the darkroom, waiting for images to be processed, can also inhibit workflow, but technologists say that proper scheduling and staggering of patients can cut down on delays.

Film technologists are also more vigilant about little details like making sure the patients remain still and hold their breath despite the procedure’s discomfort or pain. Retakes are not only costly, but are also another way to slow down workflow and decrease patient satisfaction.

Consequently, making the patients as comfortable and relaxed as possible is a small but significant part of the job, whether that is through jokes, background music, or disposable pads and “blankets” that cushion breasts and protect patients from the often cold metal receptor plates.

“The [disposable pad] is a great help because the air conditioning makes the machine cold, and it’s a shocking kind of cold when you put your breast on top of that,” Blalack said. “The blankets make them warm and comfortable.”

For about the last 30 years, Nancy A. Kavanaugh, RTRM, the mammography supervisor at the Diagnostic Breast Center, New Britton, Conn, had been working with analog mammography systems. But just this June, her imaging center upgraded to a FFDM system and her work life has changed.

“Our workload is basically the same, but it’s saving us time because we don’t have to go to the darkroom and develop the films. Where now, you take the film, and within a few seconds it’s up on the monitor and you can see it. So, if you don’t like something, you can take another one.”

Kavanaugh added that retakes, when necessary, were also streamlined compared to film, because patients might be in the middle of putting on their clothes again before they were stopped and told to undress again for a better image.

Patients seem to think that the FFDM machines are a little more comfortable, too, she said. “You’re still getting pressed in there, but with the new technology, you don’t have to hold your breath, and a lot of patients find that a relief, because they have a hard time holding their breath.”

Another simple task that has disappeared is changing cassettes and maintaining the processor. “You don’t have to fill cassettes, empty cassettes, run them through the processor, make sure and have your processor QC’d with your temperature and all of that, and there are no more chemicals to deal with, which is nice,” Kavanaugh said.

Overall, FFDM has made a positive difference in her office’s workload, as well as with the quality of the images. “The digitals are much brighter. They make things jump right off the screen, whereas with film, depending on the type of breast you have, some can be real dense and look black and kind of ugly. We don’t have that now with the digital. Everything is bright, and we also seem to be getting through to the chest wall much better.”

As with film, Kavanaugh still uses disposable coverlets for her patients, but said that it is less because the plates are cold as much as for appropriate patients.

“Most of the time we try to use them on the larger-breasted patients that tend to perspire a lot, so then they don’t stick. You can move the breasts more freely,” she said.

Whether using FFDM or analog systems, there is one aspect of the job that never changes: caring for the patients. All the technologists agree that answering patient questions, providing a calm ear for concerns, and having a sense of humor are small touches that affect the efficiency of the exam as well as the patient’s satisfaction.

“You just have to be sensitive of the situation,” Blalack said. Most of them handle it really well, but you can tell right off who the patients are that are harboring resentment and that aren’t facing the facts. Generally, they’re older, so you just treat them with dignity, kindness, and understanding.”

For Rowell, especially working in a small community, the best part of her job is the rapport with the patients. She often sees them outside of work at the grocery store and in church, and even off the job, she never hesitates to answer concerns or encourage women to get their regular screening.

“It’s corny and clich?, but that you’re able to help in some way is really wonderful. It’s not that we want to find something bad, but if it has to be found, we’d like to find it in the early stages so that something can be done about it.”

Tor Valenza is a staff writer for Medical Imaging. For more information, contact .

ACR Offers Toolkit for Talking to Patients About Breast Cancer

The Rise of Digital Mammography