Pediatric patients: an imaging challenge if ever there was one! Ultrasound has proven an invaluable tool for both diagnostic and interventional scans in these small, often fragile, wriggling patients with naturally rapid heart and respiratory rates. Ultrasound vendors have paid close attention to the special imaging requirements of this patient population and continue to develop innovations designed to address those needs.

One of the pioneers of pediatric sonography, Arnold Shkolnik, M.D., former head of the division of ultrasound at Children’s Memorial Hospital in Chicago, and currently professor of radiology at Northwestern University Medical School began using an old articulated arm ultrasound scanner for pediatric patients in the mid-1970s.

“One of the areas that put ultrasound on the map from day one was the ability to look at kidneys,” says Shkolnik. “Being able to detect renal masses and differentiate a multicystic kidney from a hydronephrotic kidney, have been the basis on which ultrasound gained credibility.”

A versatile tool
A non-invasive imaging technique, ultrasound offers many benefits that make it ideally suited for the smallest of patients. Unlike some other imaging modalities, children do not require sedation for an ultrasound exam. The lack of radiation makes it preferable for patients who may require multiple scans over many years. When a fetal sonogram reveals a suspicious finding, usually a follow-up study is performed once the baby is born.

“We don’t use ionizing radiation with ultrasound,” says Richard A. Begin, strategic accounts manager at Acuson, a Siemens Co. (Mountain View, Calif.) “More and more kids have multiple exams: pediatric patients with renal problems, pyloric stenosis, myelomeningocoele [spina bifida] are frequently seen monthly, quarterly or annually. They get repeat exams, and the fact that ultrasound does not use radiation is a real strong point.”

Please refer to the September 2001 issue for the complete story. For information on article reprints, contact Martin St. Denis 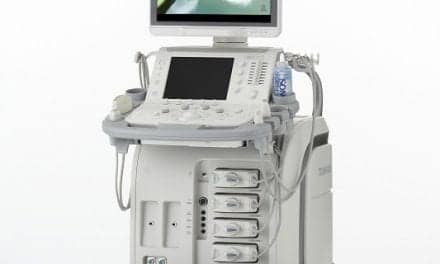